On Thursday I was pleasantly surprised by a visit from two female moose. They were exploring just outside the south yard fence. Then, I was surprised again as one made an effortless leap over the fence and started nibbling twigs off a willow in the yard. This was okay as it was a wild willow that had been spreading out too far anyway. But then a thought struck me with a less pleasant surprise. The next logical stop on the moose’s trajectory would be my apple tree. No, that was forbidden fruit. I’ve nurtured that tree for perhaps 15 years and it now produces well over 200 of the best tasting apples I can find anywhere. Every fall I spend days peeling and chopping them and freezing them for pies. No moose was chewing up that tree! I went out on the porch and waved my arms and shouted. The moose continue to masticate willow tips. Apache, the large and faithful German shepherd, said she would help. She made a run at the moose. The moose merely glanced at her and stood her ground. The dog tried once more. Same result. At that point some primordial instinct from Apache’s wolf forebears cautioned, “Hey, pup, you better bring the pack if you’re gonna take on one of those babies!” Apache backed off with what dignity she could salvage. Well, if that was the way it was going to be, it was time to bring out the gun… Did you really think I was going to shoot that moose? Relax. First, it’s illegal and second I can’t imagine killing any wild animal unless it was going for my throat or I was on the brink of starvation. No, I got my friend, Ron, to fire the 30:30 into the air. Once-no reaction. Twice-a little nervous shuffling. Third time-over the fence and into the woods! And STAY THERE, Moose! Love to have you visit, just don’t move in-there are lots of willows in the woods!

Yesterday I walked out to visit the cows. The four little Corrientes are no longer uncertain new babies. They are becoming confident and curious. When I sat down on a log my favorite, named Mouse for his color, gradually came closer until his charcoal “rubber” nose touched my outstretched finger. Shocking! He made an immediate retreat. My attention was then drawn to the rhythmic drumming of a pileated woodpecker on a hollow tree. Wait! The drumming was coming from two different directions. I set off on a search. There he was, bird number one! He was perched near the top of a rotten old twenty-foot snag that was nearly worn out by previous pecking. Okay, so where was his friend? I waited for him to sound off again and soon tracked him to a big dead poplar. It was in much better shape than the snag and produced a better resonance. (But, of course I would never tell bird number one that.) So, what was the meaning of this communication? The birds always took turns, waiting for the other one’s message to be complete before starting a reply. Were they a male and a female saying sweet nothings in Morse Code? Or were they two males loudly conveying the message, “Stay out of my territory or I’ll yank out your tailfeathers.?” Since male and female pileateds look the same I may never know the answer. A little farther along the trail two squirrels dashed across my path, one in hot pursuit of the other. Across logs they ran, then up a tree with a death-defying leap into the swaying branch of another tree, back down, and along the ground. Suddenly the pursuer turned aside and the other fled onward-only to have a third squirrel take up the chase. It was more fun than an action movie. But, was it love or war? I haven’t a clue.

Yesterday was a bad day for weather across much of the province of Alberta. You have probably heard of the infamous 100-vehicle pile-up in blowing snow near Edmonton. There was also a three-fatality accident on the other side of Edmonton. Roads east of Calgary dangerous, too. But, once again, as has happened throughout the winter, our little corner of the world was unscathed-a few light snow flurries and a cold wind was about all we had. The creek continues to flood, very beautiful to see but causing some problems. A piece of fence that crosses the creek has already been buried in ice, allowing the cows to go where they shouldn’t be. Ron is busy tying the footbridge to trees with cable to prevent it washing away if a big rush of water comes down the ice at spring break-up. No sense worrying about it yet. Whatever happens happens!

Reflections in a Flooded Creek 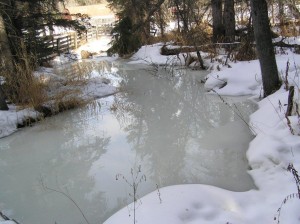 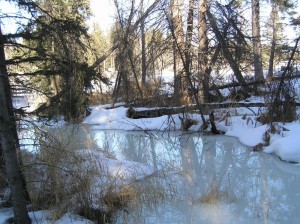 Apache did something very funny a few days ago. My back door, though fairly new, needs a firm push to engage the latch. Once or twice Apache has given the door a push with her nose, found it unlatched, and invited herself in. Usually, she has been invited out again as she has her own very nice house with a heated bed in it. Still, she is not above trying for an indoor visit. So it was that on a moderate winter night when I was in bed and just falling asleep, I heard footsteps and was accosted by a large wet nose snuffling my bed. What?! Apache was supposed to be outside. I floundered out of bed and she led me all the way through the house. There stood the back door, wide open. Having confessed to what she had done, she marched on outside and went to bed in her house. Why hadn’t she just lain down by the fire and spent a pleasant indoor night? Conscience, of course! That must surely indicate an evolution of intelligence above the average dog. (Either that or she was too dumb to keep a secret.)

A 95-year-old friend died last week. Ferrell Haug grew up in a family of twelve on an unproductive farm in the Nitchi Valley, about as far west as a wagon road could take you in the 1930s. The family was desperately poor-to the extent that they occasionally lived on oatmeal for a few days at a time. But they were made of stern stuff. The mother who gave birth to most of the children at home and relied on dandelions in the spring to give her the salad vitamins she had not seen all winter, lived into her 90s. All 12 children who were sadly undernourished by today’s standards walked several hilly miles to and from school in all weather. They survived to grow up, have responsible jobs and most raised families of their own. All lived to be senior citizens. Ferrell, worked in an airplane plant in Edmonton to help the World War II home front, cooked at a college, ran a restaurant, raised five children, helped her husband run a farm, contributed to numerous church and community projects, wrote the local news for nearby town newspapers for many years, grew a huge garden, became one of the district’s most knowledgeable authorities on birds, and was the “go-to person” when anyone wanted to know anything about Bergen’s history. I have been given the honor of writing her eulogy and, as I think on what to say, I am most strongly affected by the thought that they don’t make people like this any more. If some disaster put younger generations in a position such as these pioneers not only coped with, but eventually triumphed over, what would happen? I pose the question but do not want to think of the answer. 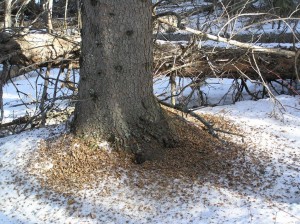 Occasionally I hear truly anguished dog yelps coming from the bottom of my yard. Surely any decent dog owner would go running to save her four-legged friend from some terrible fate. But, not me. I’ve heard those yelps before. They are the sound of frustration, not pain. One of those little buck-toothed devils is sitting on a branch, just above leaping-level, grinning and swearing at Apache. The squirrels almost give her apoplexy. And a walk in the woods brings no relief, as the forest is alive with the scurrying, chittering little beasts. Learn to live with them, Apache. Otherwise, they’ll drive you completely squirrely.